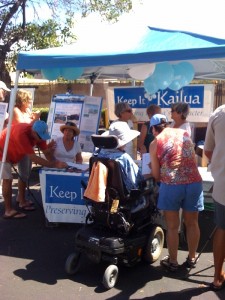 The most common description of Kailua is a “sleepy residential community” on Oahu’s windward coast. It’s a description most Kailua residents cherish. Protecting the residential character of Kailua neighborhoods and its town-center is a core mission for Keep it Kailua.

Unfortunately, there are some who believe Kailua’s residential zoned neighborhoods should be exploited as commercial visitor accommodations and Kailua promoted as a tourist town. These individuals are only interested in their personal financial gain at the expense of their neighbors and the entire community. It is now estimated there are over 1600 visitor lodging rooms in Kailua that were previously residential homes and long-term rentals. That would be the almost the equivalent of the Kahala Resort, The Royal Hawaiian Hotel, Marriott Ihilani Resort and the Turtle Bay Resort being located in Kailua.

Obviously, using residential homes for visitor accommodation businesses reduces the housing supply for residents, but it also negatively impacts the residential character of our neighborhoods and Kailua’s sense of community.

The importance of social capital was demonstrated in a ground-breaking legal case regarding visitor accommodations in residential neighborhoods, the California Court of Appeals upheld a zoning ordinance prohibiting short term tenancies (less than 30 days) in single-family zoning districts. The court stated:

It stands to reason that the “residential character” of a neighborhood is threatened when a significant number of homes are occupied not by permanent residents but by a stream of tenants staying a weekend, a week, or even 29 days. Whether or not transient rentals have the other “unmitigatable, adverse impacts” cited by the council, such rentals undoubtedly affect the essential character of a neighborhood and the stability of a community. Short-term tenants have little interest in public agencies or in the welfare of the citizenry. They do not participate in local government, coach little league, or join the hospital guild. They do not lead a scout troop, volunteer at the library, or keep an eye on an elderly neighbor. Literally they are here today and gone tomorrow–without engaging in the sort of activities that weld and strengthen a community.

The decision was appealed to the California Supreme Court and that court denied certiorari (essentially agreeing with the appellate court’s opinion).